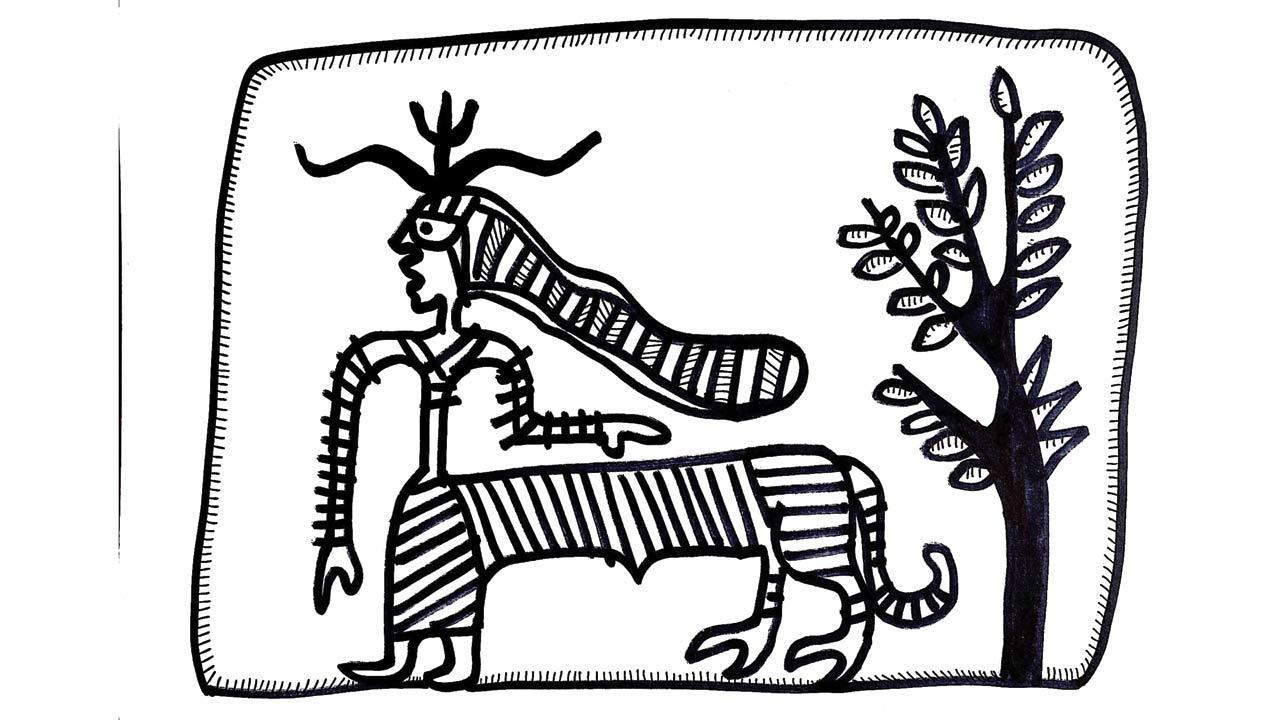 The first goddess of India on Harappan seals dates back to 2,500 BC. She is depicted as half a tiger, like a sphinx, the upper half with a female headdress and bangles, and the lower half of a cat. This is the world’s oldest image of the Sphinx, which depicts a woman paired with a tiger. We don’t know what it means. The seal showing this image also shows us a woman separating two men who are trying to fight over trees. This woman is wearing bangles in both hands and she is pulling the men keeping them apart. Tigers, including this tiger goddess, are part of Harappan lore but her story has been lost.

Four thousand years later, a miniature of a Kangra painting refers to another tiger woman. The miniature depicts a tiger swimming in a river, but its head is that of a woman. A man on the shore sees the woman’s head and believes it to be a woman swimming in the river. Excited by a possible sexual victory, he takes off his clothes and jumps into the water. The viewer of the image can only guess that the man is in a stark surprise as he learns that the underwater woman is actually a tigress. She may have been a yakshini that keeps her human head above water to attract potential prey. So, the man who would be a sexual predator ends up as food for the tiger goddess, or demon.

Did this story have Harappan roots? We do not know. There is no lion in Harappan seals. Tigers are not found in Rigveda. They appear in the Atharvaveda. The temple images depict Goddess Durga riding a lion, but miniature paintings depict her riding a tiger. Shiva is described as having a tiger skin wrapped around his body. The Padmashali weavers of South India speak of their founder Bhavna Rishi, who went here and there to give clothes to all the gods. Shiva, however, wanted animal skins, so his wife took the form of a tigress and asked her husband to offer her skin to him as an indicator of her devotion.

In a Jain legend, we are told how a man left his wife to become a monk. He returned and inspired his son to become a monk. His wife was so upset that she killed herself and reincarnated as a tigress who attacked and killed her own son, but was later pacified by her husband. In Kerala, we learn how a wicked queen tried to kill her stepson by asking her to bring him milk. Her stepson returns with a streak of tigresses and milks her. He also kills a female buffalo demon.

These stories remind us of the three Harappan seals. One depicts a bird-like goddess separating two territorial tigers, another shows a one-horned woman fighting a tiger with horns, and the third shows a man on a tree calling out to a tiger. who turns back to see him. The tiger does not seem to be threatened or threatened by the man on the tree indicating a relationship. We can only wonder whether there is any connection between tigers in Jain and Malayali folklore and Harappan seals.