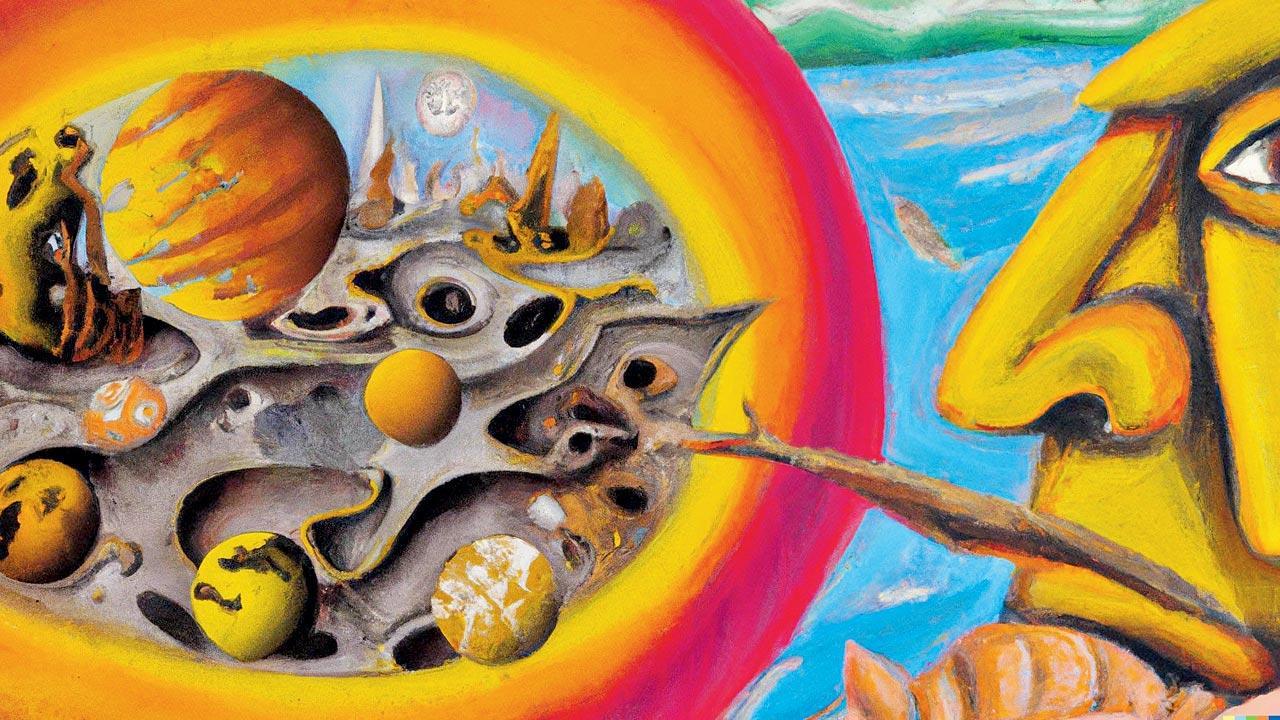 As done, I present below my report on the position of Planet 3, which is marked in our records as Rock #1794046. It is the third celestial body to orbit the Sun #8011. The survey took some time, the planet’s close to 87 orbits around the Sun. This is a long time, mainly spent in mastering the languages ​​and cultures of the resident species.

The approaching Planet 3, also known as Earth, I saw was surrounded by a thick swarm of garbage from abandoned spacecraft and orbiting space missions. I counted 128 million bits of junk smaller than 1 cm, about 9,00,000 less than 10 cm and 34,000 larger than 10 cm. Among them were dead animals, cans of drinks called Coke, gloves, pieces of Lego, and what I found was urine.

When Planet 3 was formed 4.6 billion years ago, its surface was entirely water. About 3.2 billion years ago pieces of land began to emerge, the first part of which is the area now known as Jharkhand. Currently, about 71 percent of the planet is still under water. These oceans, like the atmosphere, are covered with floating waste, a patch of which is 1.6 million square km.

Since life on Planet 3 is carbon based, I have calculated the carbon mass of its various life forms. This is the accepted method for detecting the major life form of the planet, but trust me, it is by no means an easy method evaluating 8.7 million species.

It is safe to describe Earth as a microbial planet whose primary life forms are bacteria, fungi and viruses, which contribute 93.2 gigatons of carbon (Gtc). Only plants and trees, those with 450 Gt C, are heavy. Animals that fly, swim, crawl or walk, together with only about 2.6 Gt C of Earth’s carbon mass. You can’t love germs. They have existed forever and are extremely smart to survive all kinds of difficult times.

I’d like to focus on a small species that appeared on this junk planet only 5 million years ago and contributes only 0.06 Gt C, which is a notch higher than insects, rats, and penguins. They call themselves human beings and it seems that this planet was created for their unfettered use and benefit. Although there are only 8 billion of them (e.g., compared to 20 quadrillion ants), they are capable and committed to killing all the remaining species.

Unlike almost all other life forms here, humans actively hunt each other, trying to kill as many as possible through events called warfare, genocide, mass school shootings, collateral damage, and others. Children practice this through structured exercises called video games, which provide detailed instructions on how to kill.

Most humans believe that someone calling them a god keeps an eagle eye on them, will punish or reward their behavior and each has a specific plan. They believe that he lives in a place called heaven, although no one has actually lived there or seen God. Most people know about him through the rumors of third parties who have not even seen God. Nevertheless, there is general agreement that God looks human and is male. Some believe that he is open to deals and can grant wishes in exchange for cash donations.

There is no consensus about the name and form of God. Unfortunately, this kind of disagreement is usually settled by strong humans beating the weak. Some people voluntarily blow themselves up, believing that it pleases their god.

Humans believe they can control each other’s thoughts. Parents try to control the thoughts of their children as rulers do their subjects. They do this through thought-control institutions called schools as well as banning books, movies, and songs that are deemed inappropriate. There are also privately run global institutions called Facebook and Instagram that effectively control what people think and do.

Almost all human beings claim to cherish life but usually it is their own life. Males are especially cruel to females and their offspring. Children are mentally damaged from an early age, used as free labor and sometimes even sold at high prices. Males try to control almost everything about a female, from what she wears, when she goes out and whether she can have children.

This brings us to sex, the main mode of human reproduction. Humans enter the world through a space between the female’s lower limbs. This study suggests that human males spend the rest of their lives trying to get back again, sometimes even violently (an act known as rape). Humans love to watch others try to reproduce, and documenting it is now one of the most profitable industries on the planet.

I don’t understand why humans consider it a big event every time their planet completes one revolution around its sun, and all goes well. Everyone bursts crackers, gets very drunk, whistles, sings songs and goes crazy. Needless to say, crime, rape, road accidents and unplanned pregnancies go through the roof.

Recommendation : Planet 3 is entering a phase of extreme warming. While the germs would probably survive, humans are not expected to. Let’s colonize Saturn instead. It has nice rings.