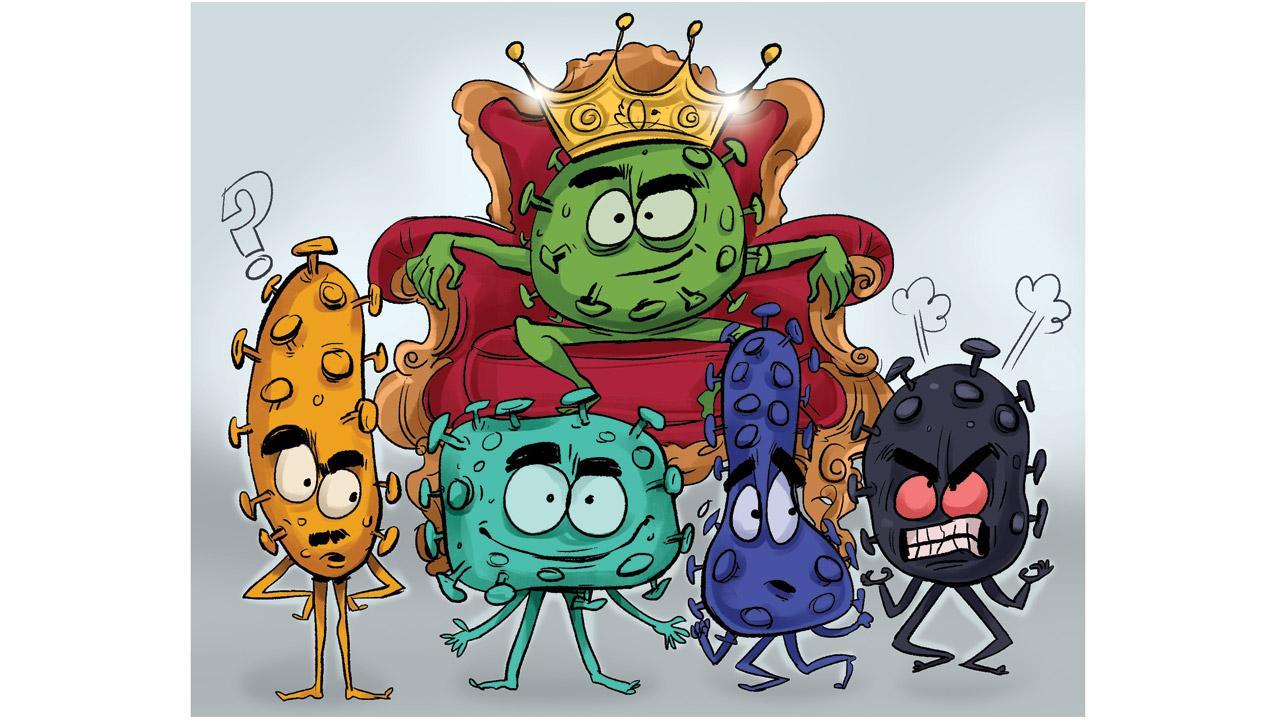 BA2 aka IMD Man lying back on the couch playing with his Maharaja Mooch.

“Ugh, your father King COVID the XIX, insists that I analyze you, see what annoys you!” The doctor panicked.

“Dude, let me tell you what pisses me off. They’re calling me ‘drop out’, ‘a sub jean drop out,’ can you believe it! Who are they that make me drop out? ’ They say—I didn’t get a BA degree, but what… what is the value of a degree these days!”

“Something deep, I think is bothering you, Mr. Ba2, sir,” said the shrink.

“I’ll tell you what really bothers me is they refuse to give me my name—the biggest insult is that they’re calling me an ‘Omicron sub-version.’ They call me that lousy half-intellect’ sub -Version’ Dare to say, my big brother, Omicron! I’m my own virus. Got it… My vision of destruction is so vast, I’m a pestilence in my own right. To be honest it’s bullshit Which has been going on since March 2020, I declined to tag… no one remembers the sequel… people just remember ‘Die Hard’… It’s always got yippy ki-yay from the original? Die Hard 2, 3, 4, Naah! I’m an Original… No Sequel, I’m Not Just an Episode, an Add-on, a Plus One, a Significant Other, I’m an Epilogue, an Epitaph, From Being the Fine Print Deny—I demand a clean slate, a blank canvas to paint on. My eldest brother, ‘Alpha-Beta’, our father, King COVID XIX, decided that he would be the first to wreak havoc, because he’s the eldest, ok so he had a field day, nobody Knew what to expect.

You know who I really respect? Our other brother, Delta, the vicious little crap, he’s the only one who understands me, and he’s really a mean one! When he lets fly, like last April… that guy who was funny… boom… when he attacked, he was Mohammed of destruction like Ghazni… that second wave… he got into people’s systems… they can’t breathe Was, desperate for oxygen, no hospital bed, leaving a dead body in his wake. My third brother, the bloody wimp, what kind of name is Omicron, has always wanted to be popular, so he has that infectious quality, but he doesn’t want to ‘destroy’ people. ‘I won’t enter their lungs, no lower respiratory organs’ which Good To Shoes tells my dad.

“So what’s your plan, son?” The doctor asked.

“I’m glad you asked. Look man, I’m the black sheep of the family, let me tell you that the second wife of King COVID XIX, she’s to blame for packing me up! Drive me out of the COVID King’s court.”

I’m no cheap Chinese product right off the bat, no Sirri, I’m proper European, Capish? I am a Great Dane! When my dad and my awesome stepmom packed me up for Copenhagen, I found a godmother there named Sir von Trier – she understands my worth – she named me ‘stealth’ – now that’s a name , ‘stealth’. Not some nambi-pambi omicron, or a greek reject alpha-beta, I’m ‘sneak’, man it’s so sad Sir von Trier and I have figured out how to poach the RT-PCR test.. We are standing on the verge of destruction. When we strike, he and I, no one will forget us!”

“What shall I tell your father?” The doctor inquired.

“Tell him, people line up to tell my story, I’ve already sold the copyright, to Pixar, they’re developing a web-based word game called ‘Health is Stealth’ like Wordle, but more addictive And someone called Ekta Kapoor, she has a serial in her mind… It will not be about me, but about my godmother and her story.”

“What should it be titled?” The neurologist asked.