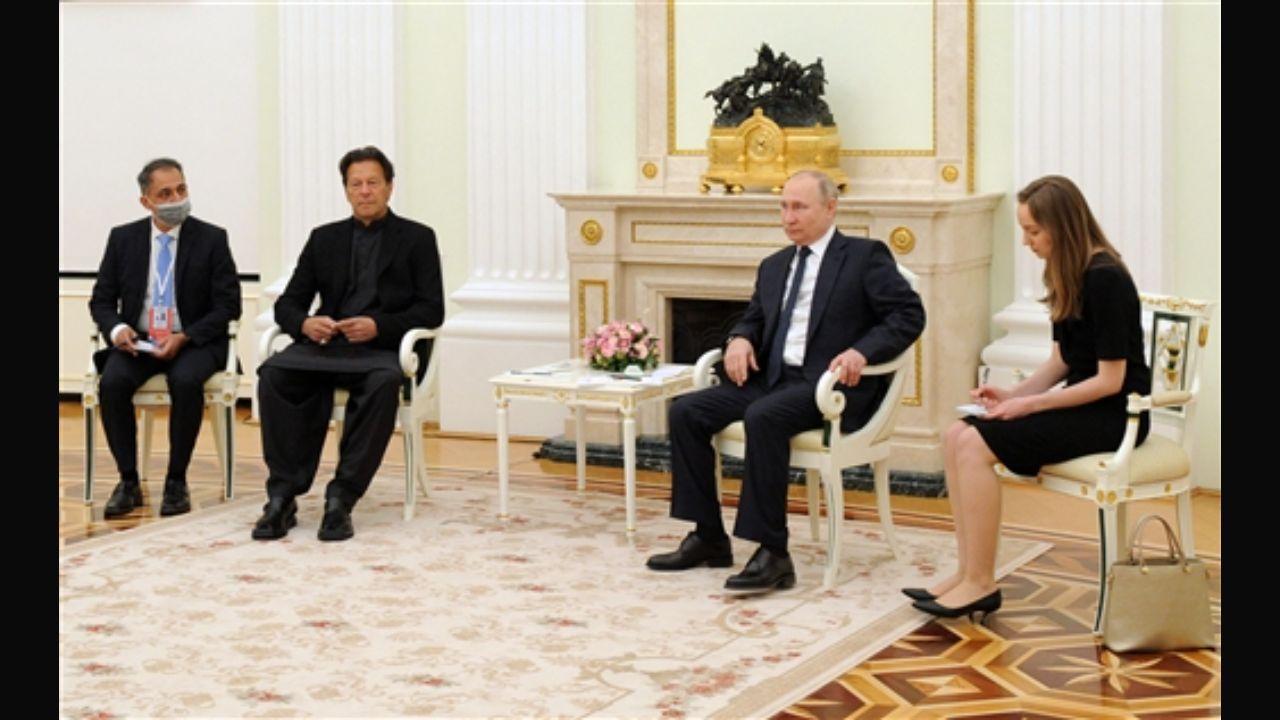 President Vladimir Putin met Pakistan Prime Minister Imran Khan in the Kremlin on Thursday in his first one-on-one conversation since the start of a special Russian military operation in eastern Ukraine and the two leaders discussed key aspects of bilateral cooperation. and exchanged ideas. Current regional topics including “Development in South Asia”.

Khan, who arrived in Russia on Wednesday on a two-day visit – the first by a Pakistani prime minister in two decades, began his engagement in Moscow by laying a wreath at the ‘Tomb of the Unknown Soldier’, hours after a Russian presidential order. A special military operation in eastern Ukraine, ignoring calls and warnings from the West at the last minute. During the meeting in the Kremlin, the leaders of the two countries “discussed key aspects of bilateral cooperation and exchanged views on current regional topics, including developments in South Asia,” a brief statement issued by the Russian presidential office said – Kremlin .

This was the Russian leader’s first face-to-face with a foreign leader since a special military operation to defend the Donbass was launched. Earlier this month, the Russian embassy in New Delhi said in a statement that “Russian official position on the issue of Kashmir and Russia’s principled stand on non-interference in bilateral disputes remains unchanged.” “The solution should be found only between India and Pakistan, and it should be based on the agreements obtained, including the Shimla Agreement of 1972 and the Lahore Declaration of 1999,” it said.

During the meeting on Thursday, President Putin and PM Khan reviewed the full range of bilateral relations, including economic and energy cooperation, especially the Pakistan Stream gas pipeline, state-owned Radio Pakistan. It said that the regional situation including the developing scenario of Ukraine was also discussed. President Putin also hosted a lunch for Prime Minister Khan. Earlier, Khan was received by Putin on his arrival for the summit. The two leaders shook hands warmly and posed in front of the camera.

They then proceeded to a face-to-face meeting, which was initially planned for an hour, but due to the situation in Ukraine, despite Khan’s visit time, both sides extended it to strengthen their ties. Was. Prime Minister Khan was accompanied by a high-level delegation, which included Federal Ministers Shah Mehmood Qureshi, Chaudhry Fawad Hussain, Asad Umar, Hammad Azhar, Commerce Adviser Abdur Razzaq Dawood, National Security Advisor Moeed Yusuf and National Assembly member Amir Mahmood Kiyani. Earlier, the prime minister’s focal figure on digital media, Dr Arslan Khalid, said that his visit to Russia “continues as planned”, dismissing reports in a section of the media that Khan has cut short his visit to Moscow. Given latest developments.

The meeting between Khan and Putin to discuss issues including economic cooperation came hours after US President Joe Biden and other Western governments imposed tough economic sanctions on Russia for sending its troops to parts of eastern Ukraine. Pakistani media reported that Khan was expected to push for the construction of a long-delayed, multi-billion dollar gas pipeline in collaboration with Russian companies. Separately, Foreign Minister Shah Mahmood Qureshi and his Russian counterpart Sergei Lavrov reaffirmed their commitment to further strengthen bilateral ties at their meeting in Moscow. They discussed important regional and global issues including bilateral relations, enhancing cooperation in areas of mutual interest. Qureshi said on the occasion that Pakistan attaches special importance to bilateral relations with Russia.

He said that the relations between Pakistan and Russia have gradually strengthened. He said that Pakistan is moving ahead on the agenda of promoting economic priorities and regional ties. In Washington, State Department spokesman Ned Price said the US had conveyed to Islamabad its position on Russia’s “new invasion” of Ukraine and that it was each country’s “responsibility” to object to Putin’s actions. “Well, we definitely know about the trip,” Price said. “We have conveyed our position to Pakistan about Russia’s renewed invasion of Ukraine, and we have informed them of our efforts to advance diplomacy on war.” It is the responsibility of every responsible country around the world to voice concern, to object to whatever Putin has in mind for Ukraine,” he said in response to a question on Wednesday.

In an interview to Russia’s state-run RT television network ahead of his visit, Khan, 69, expressed concern about the situation in Ukraine and the prospect of new sanctions and their impact on Islamabad’s growing cooperation with Moscow. Khan, a cricketer-turned-politician, is the first Pakistani prime minister to visit Russia in 23 years after former Prime Minister Nawaz Sharif’s visit to Moscow in 1999. Pakistan’s ties with Russia have gone beyond bitter Cold War hostility in recent years, and the cold in Pakistan-US relations has pushed the country further towards Russia and China.

Not only are the two countries exploring options to deepen economic ties, but Russia is also keen to sell arms to Pakistan, which it has avoided in the past due to India’s opposition. In another sign of deepening ties between Moscow and Islamabad, the two countries have been regularly conducting joint military exercises since 2016. In addition, the two countries also share similar views on major regional and international issues, including Afghanistan.