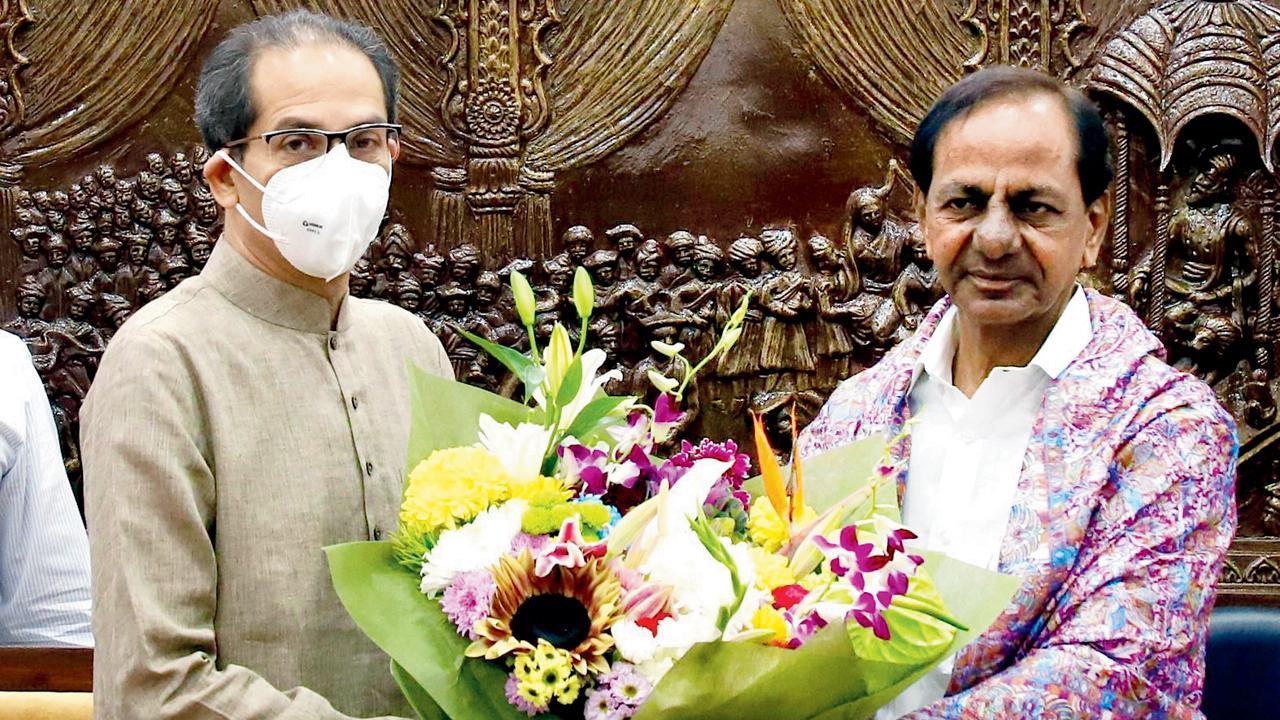 Politics is a game in which whatever happens and its rules change according to the skill of the players. Telangana Chief Minister K Chandrashekhar Rao (KCR) on Sunday met his Maharashtra counterpart Uddhav Thackeray and NCP chief Sharad Pawar in Mumbai, with or without the Congress, to revive the effort to form an anti-BJP front. KCR and Thackeray said they have agreed to work together to bring about change in the country – to remove the Bharatiya Janata Party from power in New Delhi and elsewhere in the country. KCR said that he will talk to all like-minded parties including the Congress to join hands.

This is the second visit by a non-BJP chief minister to Maharashtra. West Bengal CM Mamata Banerjee was in Mumbai a few months back, but she resolved to keep the Congress away. KCR seems to have learned a lesson from that incident. He did not anger the national party by endorsing Mamata’s vision. Thackeray’s Shiv Sena and NCP chief Sharad Pawar, whom KCR met later, had said that there cannot be a formidable group without the Congress.

Mamata has been in touch with KCR and Tamil Nadu CM MK Stalin, and she is yet to shrug off her ‘let Congress go’ rhetoric. Thackeray and Pawar cannot afford to harass the Congress as it completes the MVA triangle. KCR and Thackeray, who are very vocal against the BJP, did not speak words on Sunday. KCR felt that regional and national parties together could get rid of the party at the Centre. He combined the agenda of cooperation between Maharashtra and Telangana with a broader plan to form an anti-BJP alliance at the national level. “Maharashtra inspires us.
Anyone who starts from here is successful. We both have started an effort which will see good effect in the days to come,” he said, invoking Chhatrapati Shivaji Maharaj and the late Balasaheb Thackeray, before meeting Sharad Pawar, the smartest player in the game, whose skills could be useful. Is adding other players.

KCR said he hoped Pawar would guide him and the NCP chief may host like-minded leaders in his hometown of Baramati to decide in which direction he should proceed. Pawar said that they did not discuss much on politics, but discussed development, social and agricultural issues which they should solve together. Unlike Thackeray, Pawar downplayed the political part of his talks with KCR, but indirectly indicated that the CM was welcome in the joint effort. Earlier, he had said after meeting Mamata that the Congress was an integral part of the opposition, but suggested that Congress leaders need to work harder.

The results of the state assembly elections, especially those of Uttar Pradesh, will have a great impact on the proposed anti-BJP plan. Maharashtra is the second largest state after UP as it sends 48 Lok Sabha MPs. The current majority belongs to the (erstwhile) alliance partners, BJP and Shiv Sena. The 2019 split has added to the Shiv Sena’s responsibility to maintain that number, which puts Thackeray in the league of regional satraps, who have a Lok Sabha strength of between 22 and 20 seats, compared with that of the major opposition party, the Congress. is next door. The CMs of Telangana, West Bengal and Tamil Nadu, who are increasingly against the BJP, lead the parties that send the largest number of MPs from their respective states. Equally strong, Odisha CM Naveen Patnaik and Andhra Pradesh CM YS Jagan Mohan Reddy have not disclosed their cards. BJP opponents from Jharkhand and Bihar will also be included. Congress is still kicking in Karnataka and Chhattisgarh, Kerala is giving it some hope.

With the BJP-Shiv Sena alliance dead and new alliances projected, Maharashtra’s Lok Sabha results in 2024 could be unpredictable. But in any case, Maharashtra will remain the center of attraction. Given the current volatile trend, the rivalry between the BJP and Shiv Sena promises to escalate for an eternity. Yet, contrary to expectation, well-wishers of saffron parties believe in an often used expression: nothing is permanent in politics.

The anti-BJP alliance largely depends on how two-party (or two-alliance) states, where the BJP has not been able to form its government or has lost it, respond to the call for unity. The BJP, which sees no essence in the opposition’s proposed front, will still work on retaining the existing numbers from its region in the North, North-West and maximizing its strength to stay in the game. However, when regional stalwarts talk about bringing down the Narendra Modi-led chariot to the anti-BJP front, one thing gets highlighted more loudly is his personal agenda to be in the Prime Minister’s Office. History says that the collective, if any, still fails when individual ambitions clash with the larger goal.

Dharmendra Jore is the political editor of Mid-Day. He tweeted @dharmendrajore
Send your feedback to mailbag@mid-day.com