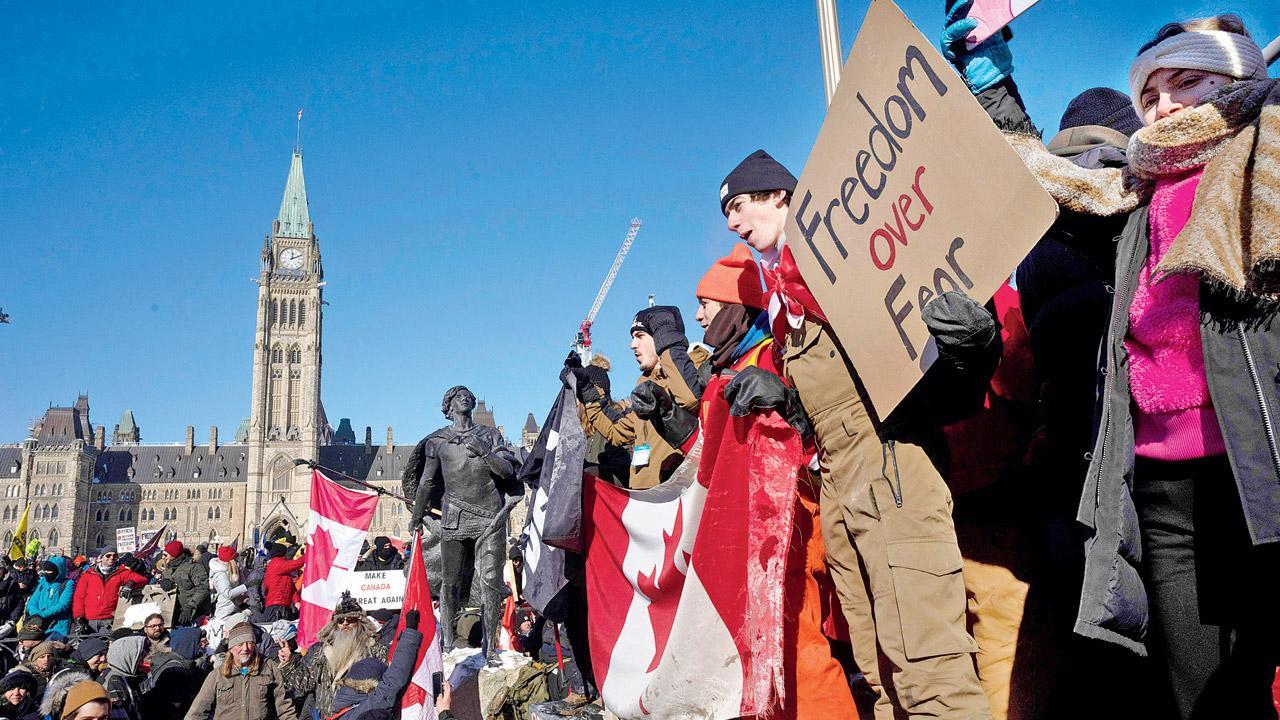 In a scene at odds with Canadians’ reputation for goodness and rule-abiding, thousands of protesters railing against vaccine mandates and other COVID-19 restrictions descended on the capital over the weekend, deliberately blocking traffic around Parliament Hill. Some urinated and parked it at the National War Memorial. One danced at the Tomb of the Unknown Soldier. There were symbols and flags with a swastika in a number. After Canada’s largest pandemic protests ever, protesters have found little sympathy in a country where more than 80 people are vaccinated. Many were outraged by some indecent behavior.

Prime Minister Justin Trudeau called the Ottawa protesters a “fringe minority” and said they were “disinformation and misinformation online, about conspiracy theorists, about microchips, about the god who goes with tinfoil hats.” Organizers raised millions for a cross-country “Freedom Truck Convoy” against vaccine mandates. It was backed by former US President Donald Trump and billionaire Elon Musk.

Some protesters took to the streets on Tuesday saying they would not leave until all vaccine mandates and restrictions were lifted. They also seek to overthrow Trudeau’s government, although this has accounted for some measures, most of which were implemented by provincial governments. During the display, a statue of Terry Fox, a national hero who lost a leg to bone cancer as a youth and on a fundraising trek across Canada in 1980, is installed on an upside-down Canadian flag. and was wrapped with a sign that read “Mandate Freedom.”

“My kids were shocked. Like all Canadian youth, they grew up with Terry Fox as a hero,” said Deputy Prime Minister Chrystia Freeland. “This is not the Canada we want to be. And I really proudly believe, and I know, this isn’t what Canada is.” Ontario Premier Doug Ford said he urged people to “desecrate our most sacred monuments and the swastika and hate and intolerance.” He was “extremely disturbed” to see a wave of other symbols.

The World Health Organization has called on countries that are beginning to lift COVID-19 measures to do so in a steady and slow manner, as recent data showed a sharp increase in coronavirus-related deaths around the world. “Since the Omicron variant was first identified only 10 weeks ago, about 90 million cases have been reported to the WHO, which is more than 2020. We are now starting to see a very worrying increase in deaths in most regions of the world. are doing,” said WHO Director-General Tedros Adhanom Ghebreyesus.

Tonga was to enter lockdown on Wednesday evening after two port workers who helped distribute aid arriving in the nation after a volcanic eruption and tsunami tested positive for coronavirus.